The Statues of Giacomo Colombo 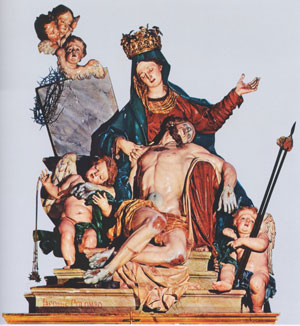 The sculpture of the Pietà is consider to be one of the great masterpieces of the sculptor Giacomo Colombo. It has a pyramid-like shape and presents the body of Christ down from the cross and laid on some steps where Mary is sitting and, with an eloquent gesture, is showing him to the faithful behind them. Beside the two main characters are two angels holding up the instruments of the passion: the spear that pierced Christ’s chest and the barrel and sponge soaked in gall and scourge. Behind the main characters is the tombstone of the Holy sepulchre, topped by three cherubs an a crown of thorns.

In Italy the iconography of the Pietà spread during the second half of the fifteenth century. The sacred theme had considerable success with it’s most memorable representation of all being the sculpture by Michelangelo Buonarroti, now at St. Peter’s basilica in Vatican City. Colombo’s representation shows similarities with Michelangelo’s sculpture yet his personal artistic touch is prevalent, his work somewhat recalls the Pietà of Gregorio Fernandez (1616-1617) at the Museo Nacional de Escultura de Valladolid, Spain. In Colombo’s work he can see references to easter processional traditions typical of the spanish culture. The artist was always able to find a good meeting point in his work between what was requested of him by clients and what he personally wanted to create. In 1897 the sculpture was restored by fon Michele Paesano from the Collegiate Church. The restoration work was done by Raffaele Delle Campe. One year later the bicentenary of this sceptre was celebrated with big festivities. In 1920 the madonna was coronated with a golden crown bought by the ebolitans. In 1984 the sculpture was vandalised, leaving three angels damaged.
testo di Gerardo Pecci 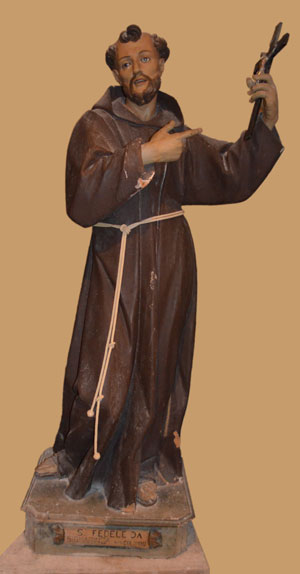 The saint is standing. He is wearing the Franciscan robe, but does not have the halo. He is showing the crucifix to the faithful while pointing at it with his right hand. He had a bear and his head is slightly tilted and rotated to the right. Glass eyes give the face a remarkable sense of reality and verisimilitude. His gaze is focused and intense. His robe is belted at the hip by the Franciscan cord. The anatomy of the figure has great attention to detail. The figure of the saint rests on a low wooden slab bearing the cartouche with the name of the saint, that of the sculptor and the date. The figure of the saint is standing on a wooden slab with incisions of both the saint and the sculptor’s name and date.

The St. Fidelis of Sigmaringen statue is located in the Convent of St. Peter the Apostle, commissioned to Giacomo Colombo in the last decade of the seventeenth century in Naples. Along with it, a “twin” statue of San Felice was commissioned which can now be found at the Convent of Franciscan monks in Cava die Tirreni. Both Saints commissioned are representative of the franciscan religious order. The statue of St. Fidelis was sculpted following the devotional canons dictated by the catholic iconography. In fact, his size is true to life, he is holding a cross on one hand and pointing at it with the other, inviting the faithful to ponder upon the sacrifice of Christ. His attentive gaze is directed to those who see him, and is an invitation to meditation. The St. Fedelis recalls almost entirely the statue of St. Francesco d’Assisi, also attributed to Colombo, now located in Stigliano, Matera. Colombo was a real master in rendering all of his sculptures natural and almost “real”. The current state of that statue is not good, it is in need of restoration from the natural ageing of wood.

Giacomo Colombo was a sculptor of marble, wood and more. He was also a painter. In 1701 he became a prefect of the Corporation of Painters of Naples. He is the most significant artist in woodwork sculpture between the second half of the seventeenth century and the first three decades of the eighteenth century. He had a close friendship with Francesco Solimena. His sacred sculptures in polychrome wood are very appreciated and can be found in many Italian churches and in Spain.
testo di Gerardo Pecci