“The Sele is a river of Lucania, the Alburno port and the mount by the same name are six mile from Prime Taverne. Lucilio mentions it in this verse: From here the port of Picentia is four miles towards the Silaro river and the Alburno port.”

This is the first piece of evidence of the existence of port Alburno. 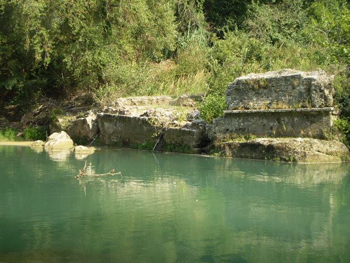 It is a Roman river port along the river Sele and was of primary importance for the surrounding velley. The Sele plain was a very rich land, very well known for its precious resources. The greeks founded in it Posedonia, a stable and prosperous settlement. The Romans also took advantage of this area building in it important roads and ports on the river such as the Alburno port. The port was important for commertial development of the Sele area but also territories further inland. The port was also important for travellers coming and going. The mercantile activity explanded from the port and reached a wide range as it facilitated the exchange of produce from different regions: from Lucania, Calabria and Sicily. It allowed the city of Eboli to export wood and other material and to import ones they were scarce on. 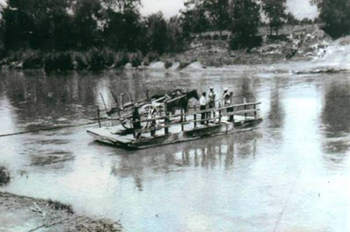 In olden times the water from rivers was fundamental in the development of territories. Navigation would start in the bigger rivers and then the goods would be transferred onto smaller boats that could navigate through smaller rivers. The exact shape and form of these smaller boats isn's exactly know, but they certainly did not have sails, however they did have masts used to attach ropes to animals that pulled the goods. They had two wheels, one for maneuvers going up and one for the ones going down the river, and their were flat on the bottom to navigate shallow parts of the rivers.