Montedoro Hill overlooks the old town of Eboli and is characterized by steep which elongate towards north-east and south-west. It is crossed in the east and west by two streams, the Elmice and a tributary of the river Tiranna. In the years between 1973-1984 the Archaeological Survey of Salerno in collaboration with a team of French scholars, led the excavations along the north and east of the hill and discoveres large sections of the fortification line, an inhabited area and an area of worship. At the top of the hill, near the church of San Giuseppe, the excavations showed remains of a hut fund relevant to a village and not far from there traces of a kind of furnace in clay. From here originate numerous ceramic fragments, among them of considerable interest are a group made of paited clay, from Miceneo III C1 perion. Based on the materials found, the town dates back broadly to the phase of the Late Bronze Age. The analysis on the different types of ceramics recovered allowed to chronologically frame the final stage of this area between the second half of the fourth and half of the third century. B.C. Along the western slopes of the hill, numerous ceramic fragments were recovere attributable to the early Iron Age. 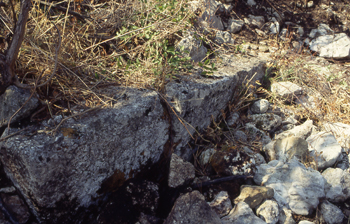 Intensive research and excavation was undertaken by two local scholars Antonio Matta and Girolamo Romano between 1829 to 1832. They were the first to find and document several wall formations. In the years between 1973-1975 the same team of French scholars, led other excavations along the northern side of the hill with the intent of following the progress and development of the city walls, the investigation led to the understanding that the line of fortifications was characterized by the presence of different construction techniques. The items found in the excavation have allowed us to set phase of occupation of the walls between the late fourth and early third century BC. In the southern side of the plateau some circles were dug up that indicate the presence of an area of worship. In the same area during the fifties, a votive collection was found, within which a votive statue representinv a young man with curly hair and oddly open short legs. These were date back to the beginning of the third centruy B.C. Tothe beginning of the imperial ages. Back in 1640 the stone from this area was used to build parts of the old town of Eboli, this greatly ruined this archaeological site. The study reveals that the hill of Montedoro was the religious and political centre of this settlement. The areas below this hill were mainly used as burial grounds. The first remains of housing structures date back to the hellenistic age (III-II c. BC). The archaeological park is currently not open to the public. The material found at the site are exposed at the “Museo Archeologico di Eboli” and “Media Valle del Sele”