Other churches in the Historic Centre 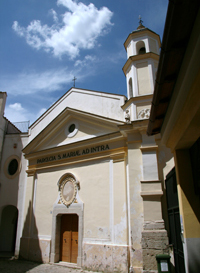 The first document that gives news of the church of Santa Maria in Intra dates back to 977. In 1236 it had a rector. In 1305 it is listed as the rectory with two owners. From the fourteenth century it is best known as a parish. It's called "ad intra" to differentiate it from other churches dedicated to the Virgin, because it is located “intra” (between) the walls of the city between the Benedictine monastery of San Antonio Abate and the Castle. Inside the church, on the right side wall there is the chapel dedicated to Santa Maria del Soccorso, with frescoes of the '500 where you can catch a glimpse of the Virgin Mary with a stick in her hand while defending her son from the snares of the devil, and on her right an impressive St. Michael the Archangel. Particularly interesting is the bell that has a marble bas-relief representing the Eternal Father holding the globe. In this chapel the Stele Eburina was found, stating that Eboli was an ancient Roman Municipium. Currently the stele is located inside the National Archaeological Museum of Eboli and the Media Valle del Sele. In 1907 the church was equipped with a statue of the Addolorata, by Guachi. In 1924, the Pious Union of the Daughters of Mary, bought the statue of St. Agnes, by artists Vollono of Naples. With Archbishop Decree of 1962, the title and the benefit of S. Maria in Intra have moved into the church of Santa Maria della Consolazione del Rione Paterno.

The Church of San Marco al Castello, located within the impressive Castle of Eboli, was built most likely at the same time as the castle. The first documented report of the church is dated March 1135. It is single naved and it has three altars. On the central altar there is a picture, from the first decade of the eighteenth century, depicting the Madonna of Carmel with the Baby resting on clouds with two flying angels who are about to crown her, down to the right there is an imposing St. Mark, patron of the church, as he writes on a huge book, behind him St. Nicholas of Bari. On the left side there is S. Teresa of Avila in prayer with St. Apollonia behind. On the left there is a painting of St. Christopher with the Christ Child on his shoulders, on the other side a picture, always in canvas, depicting St. Charles Borromeo. On the right wall there is a fresco of the castle. Today the church is open for worship. Institute ICATT - placed inside the castle as its chaplaincy- but is not open to the public, except for very rare events. 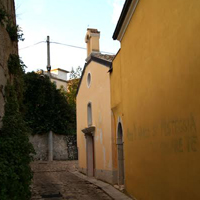 Near the archaeological site of the Industrial Area is the old church of St. Margherita of Antiochia. A first document that mentions it is dated 1382, when the noble Nicola Massacanina, lying seriously ill, draws up his last will, leaving legacies to ebolitan churches, including the church of St. Margherita. It is mentioned in another document dated 1429. In other documents of the fifteenth century it is said that the churches of St. Margaret and St. Mary were of the Ragho and Cefalo families. After the promotion of the church of S. Maria della Pietà to Collegiate church, the primicerius Giovan Battista Gallippo took possession of it on 8 March 1536. Inside you can admire the statue of the Saint and a fresco depicting Santa Margherita, recently restored. In Eboli Santa Margherita was revered for relieving headaches. With a popular invocation - that united the sacred with the profane - women from Eboli would say: "Santa Margherita vergin and zit fange passà Uocchie cigliun and evil 'and cap" 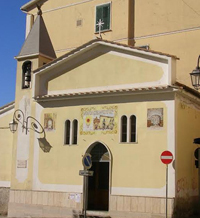 The Church of St. Joseph stands in front of the Collegiate Church of Santa Maria della Pietà. In the Middle Ages strangers who came from distant lands arrived to Porta Santa Caterina, one of the five doors of entry to the village, so called because it was by the parish of St. Catherine (now called St. Joseph's Church) which is documented for the first time in 1215 and abolished in the year 1652 to be annexed to the neighboring parish of St. Bartholomew the Apostle.

In the church of Santa Caterina at the end of the eighteenth century, settled the Congregation of St. Joseph; in it we celebrate Saint Lucia on December 13 and St. Joseph on March 19 with a procession.