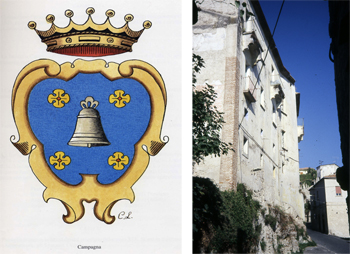 The distinguished and aristocratic Campagna family lived in Eboli in 1500 and took an active part in political and religious life of the city: fourteen members became priests, six of them mayors and three women became abbesses. The Campagna family married to many of the most prominent families of Eboli among which the Albano, the Corcione, the Paladino and others of no less prestige. The crest of the family represents a central bell and four roses in the corners.

This Mansion of the seventeenth century belonged to the Campagna Family. It is located in Piazza Porta Dogana, the old center of Ebolitan city life, as indicated by the Cadastre of 1753, which set out the following information about the Campagna family: Head of the Household is the magnificent Nicola, noble. Wife Francesca De Marinis. Number of servants- 5. The family lives home of their property in Portadogana. It has houses, bakery, shops, land, olive groves, vineyards. Thirty buffalo ... three hundred sheep, a hundred goats, fourteen oxen plows. The façade, in Via Gaetano Genovese, features three balconies supported by brackets and molded frame with Roman vaults. The stone portal molded attracts the attention of passers by with its finesse and elegance conferred by the decorations carved at the base of the piers. Apart from the adjacent buildings which have been demolished, the building remains almost intact, although following the damage caused by the 1980 earthquake, it is unfortunately closed and can not be visited.