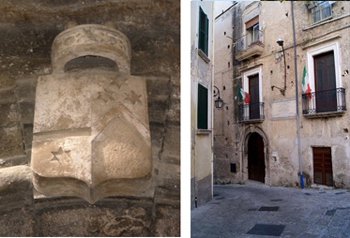 The La Francesca family lived in Eboli in the seventeenth century, taking an active part in the city: six members of the family asked to become priests, three others were mayors of Eboli and two were notaries. Probably the most renowned member of the family was the lawyer and patriot Francesco La Francesca. On September 6th, 1860 he hosted Giuseppe Garibaldi and part of his men on their way to Naples. Among Garibaldi's men were two young ebolitan: Michele La Francesca that later will serve as an officer of the National Guard, and Francesco Paolo Cestaro, who dictated the inscription, carved on marble at the entrance porch of the palace La Francesca in memory of that historic event.

The Mansion of the eighteenth century belonged to the family La Francesca and was on the eponymous street. The value of the building in the memory of citizens of Eboli is enhanced not only by its imposing and majestic appearance but above all by the importance assumed in the nineteenth century when it hosted on 6 September 1860 the hero of the two worlds Giuseppe Garibaldi , during his march towards Naples. A plaque on the facade of the building attests to his short stay. The building has an irregular plan, it is rectangular and covers and entire square. On the main façade you can admire the impressive portal in blocks of carved stone, decorated with fine spirals, on which we see the family crest. The crest consists of two vertical sections, the one on the left is subdivided into three horizontal bands, of which the central one is white and the third is occupied by a six-pointed star. In the right section there are three-star, also with six points and a compass. The decorations and stucco balconies are significant and interesting as are the window sills in wrought iron.