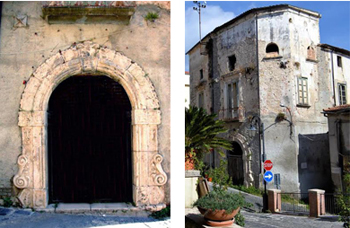 The distinguished and wealthy Paladino Palace was known and active at Eboli in the sixteenth century and this is demonstrated by the fact that Paolo Paladino, was a notary in the first half of 1500. The fame and the importance assumed by Paladino are proven by their possession of several chapels with burial in the church of the Holy Trinity in Eboli. Fourteen members asked to become priests, twelve were mayors of Eboli, two notaries; The Paladino also contracted marriage with various noble families from Eboli includes, of course, the aforementioned family La Francesca. The Paladino family is entered in the Golden Book of Italian nobility and the Official List and Italian Nobles. The Cadastre of 1753 says: "Don Tommaso Paladino, head of the family. Don Lorenzo, brother. Donna Teresa, sister ... Three servants. He lives in his own palace home in Portadogana. He owns: a house with garden at Rua, a stable, two houses in San Nicola, a house in Portadogana, a shop, a small house with an oven.

In Via Gaetano Genovese, close to Piazza Porta Dogana, the political heart of the old town, stands the noble palace of the Paladino-La Francesca from the sixteenth century. It originally consisted of a single floor. The building in 1670 passed to the Caravita who built the second floor. The main facade is occupied by a stone portal decorated with molding. Two balconies with wrought iron window sills round off the front. Also on the facade we can admire the family crest, in very good condition, divided into four parts, each of which depicts a lily. From Via A. Vacca we see the simple stone portals, and two rows of windows with stone and stucco frames. Following interesting conversations with family members of La Francesca, I discovered, with much enthusiasm, that the building houses a staircase of the highest value; also, the renovations to recover the building caused by the damage of the earthquake, were recently suspended since a tunnel was discovered which seems to lead up to the castle.