Sporadic findings on the hills of Eboli testify ancient human presence in periods widely prior to the third millennium B.C.. The first documentation of the presence of people in this area dates back to Neolithic times, a time of transition between the Stone Age and the age of metals. The evidence for this are cave-like tombs from the Gaudo Civilization (1800-2500 B.C.) found in Madonna della Catena. The examination of the funerary remains shows that this population had cultural characteristics similar to those of the Aegean-Anatolian that landed in southern Italy and started to settle along the river valleys.

The first records to date back to the Bronze Age have been brought to light on the hill of Montedoro that is the original place of permanent presence in the territory. From the ninth century. B.C. in the plain of Sele arise populations from southern Etruria, bearers of the Villanova Civilization; beginning from the coastal town of Pontecagnano they radiated inland all the way to Vallo di Diano. It is at this stage that there was a merging of the Etruscan presence both of the Sele and the Greek presence on its south. Eboli hence became a natural bridge connection the two civilisations and the economies their economies. Eboli, having always been separated from the coast is set to control the inner part of the plain and is therefore a natural route of communication between the coast and the hinterland; this greatly explain the long stay of the settlements. 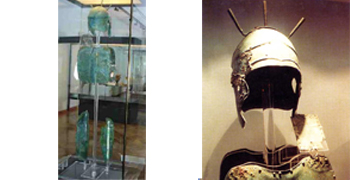 At the end of the fifth century B.C. italic civilisations, which were now deeply influenced by the Greek and Etruscan cultures, began to spread their hegemony over most of Campania. Eboli becomes a point of reference for the tribe of the “Lucani” that build a fortified city on hill Montedoro in order to have control over the entire Sele plain. According to tradition, this is where the name Eboli come from: the Lucana tribe of the Eburini. Archaeological finds on the Montedoro hill such as the fortified city walls and numerous cemeteries bear witness to the magnitude and power of the settlements to which even Paestum had to bend.

With the arrival of the Romans and the construction of Via Popilia, which linked Capua and Reggio, Eburum (Roman name of the city) becomes a thriving artisan trade centre and it is awarded the title of “municipium”, attributed only to cities of great importance.