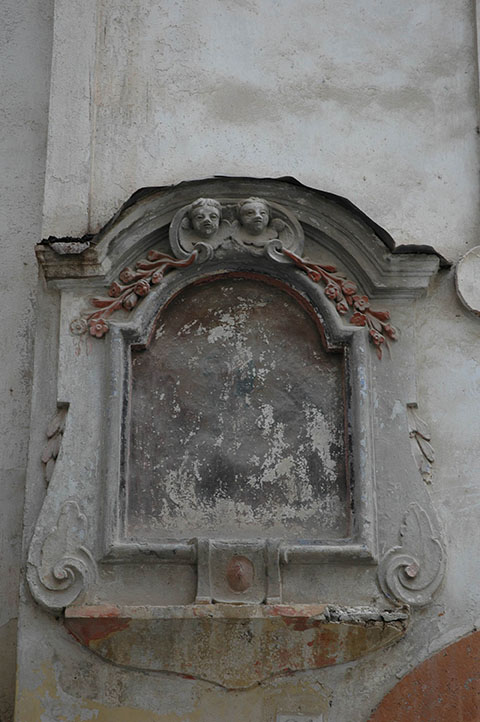 The Borgo Antico houses many shrines, some ancient, others more recent, some offers for all to see, other jealously guarded in internal hallways. Built by private citizens as an act of devotion or as an act of gratitude to the Saints or the Madonna for a grace received, the shrines have always been an expression of art of popular religiosity. The term “edicola” comes from the Latin aedicula, and was originally associated with the small chapels inside which were sacred image that were venerated. The shrines on road, the so-called "madonnelle" (though not all had Mary as a subject), placed in temples or the sides of buildings are part of a tradition that dates back to the Roman civilization; In fact, in those days the cult of the Lares was wide spread, so their effigy was placed on the walls of the Insulae and Domus. The function of the “edicola” was and is for those remaining a meeting point and reference for the whole neighborhood as a place of worship to pray the Rosary or simple prayers throughout the day. In the past the shrines were placed to protect a house or a street and erected by the guilds (the coronary, butchers, ortolan etc.) And women (who were called "madonnare") were entrusted the task of keeping alive the devotion and care of “edicole” with with some flowers or candles. Their value lies in being witness of the faith of the whole community and, therefore, they should be protected beyond their more or less great artistic value. 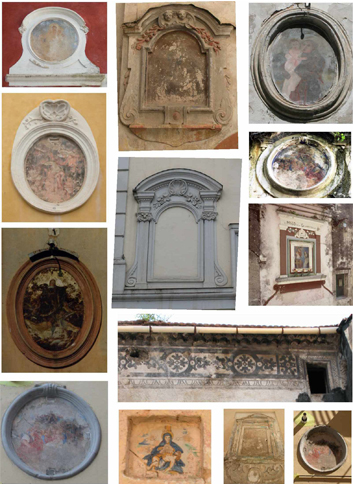 The shrines can be different in:
Regarding the representations of and painting techniques, the most common were wall painting; still now it is possible to see the original paintings peeking through the newer paintings that cover the old ones. Images of ceramic or terracotta are more recent, for their peculiarities of the lasting colors, they were very common above all in the nineteenth century: these materials, even today, are used in new buildings. The most rare are the niches with the sacred image painted on canvas or paper, materials that do not lend themselves to the outside, but could be found in the chapel shrines or in the more sheltered ones built along the roads under vaulted passages. Interesting are also the stucco frames that may be more or less elaborate (with presence of floral elements, urchins, shells) depending on the time in which they were made. 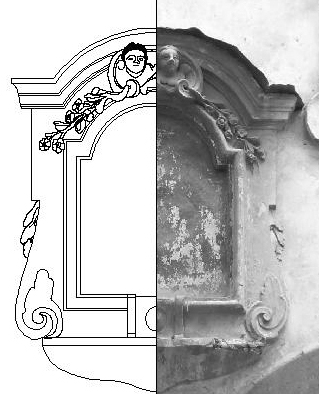 For the study of the relationship between a shrine and interested territory, comes the iconographic research that helps us in the characterization and definition of their historical context. From the analysis and cataloging of the shrines found in Eboli, two icons were identified most frequently: the Pietà and Our Lady of Carmelo. Clearly inspired by the wooden group depicting the Pietà (1702) by Giacomo Colombo (sec. XVII / XVIII) in the church of Santa Maria della Pietà and the panel painting depicting the Madonna del Carmelo (1574) of the Ebolitan artist Giovanni Luce de Luca (sec. XVI / XVII) preserved in the monastery of SS. Trinity (St. Anthony of Padua). Other characters present are those of mariana origins (Annunciation, Our Lady of the Rosary, Our Lady of the Sea or Stella del Mare, Our Lady of the Three Crowns, Coronation of Our Lady), subjects that relate to the Saints venerated in the city (SS. Cosmas and Damian, Santa Rita, San Nicola) or scenes from the life of Christ (Nativity, Calvary). 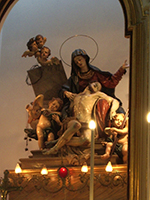 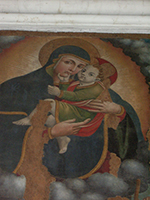 The shrines are located along the streets, because walking is tiring and walking before the Lord reassures the soul and gives courage. And the ones on the walls of the houses is explained by the fact that that is where most human affairs are accomplished, that's where life begins and ends; that's where love is born, and grows between couple and the children, where the moments of joy are intertwined with those of suffering; you learn to speak and to pray, to live and die: the shrine therefore is charged with individual meanings that express deep devotion. 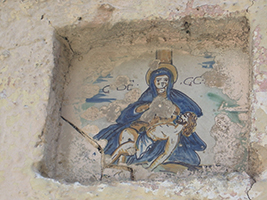 So these are the reasons that should lead the community to take steps to preserve them and try to integrate all these works within routes not only of religion, but of culture, architecture, so as to highlight their most intimate local values. The research lead to cataloging the shrines and their integration to inside an itinerary of a relaxing walk, which seeks to highlight the shrines themselves, seen within a wider context also as elements that enhance the charm of the old town.

Cataloguing:
To catalogue shrines a system was created in which we tried to enter the date of the survey, all relevant information with a subsequent identification such as type, location, iconography, historical period, state of preservation, size, photographic survey (also historical). Particular importance was given in the search to the definition of the state of conservation / degradation of the various shrines that in most cases especially for the oldest was of urgent restoration work. Each shrine was dated and the state of evolution or regression was registeres. The following section illustrates, by way of example, some cataloguinging tabs and an itinerary (Fig. 4.106) that enhances the relationship between the shrines and the Old Town: 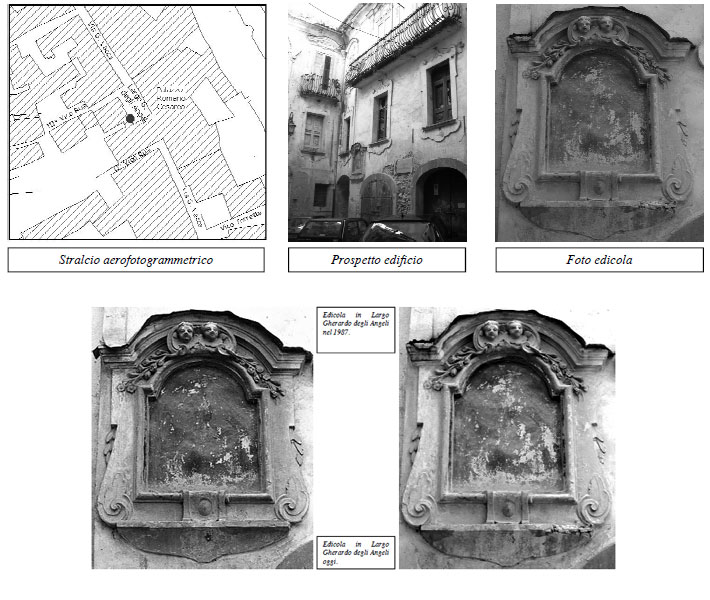 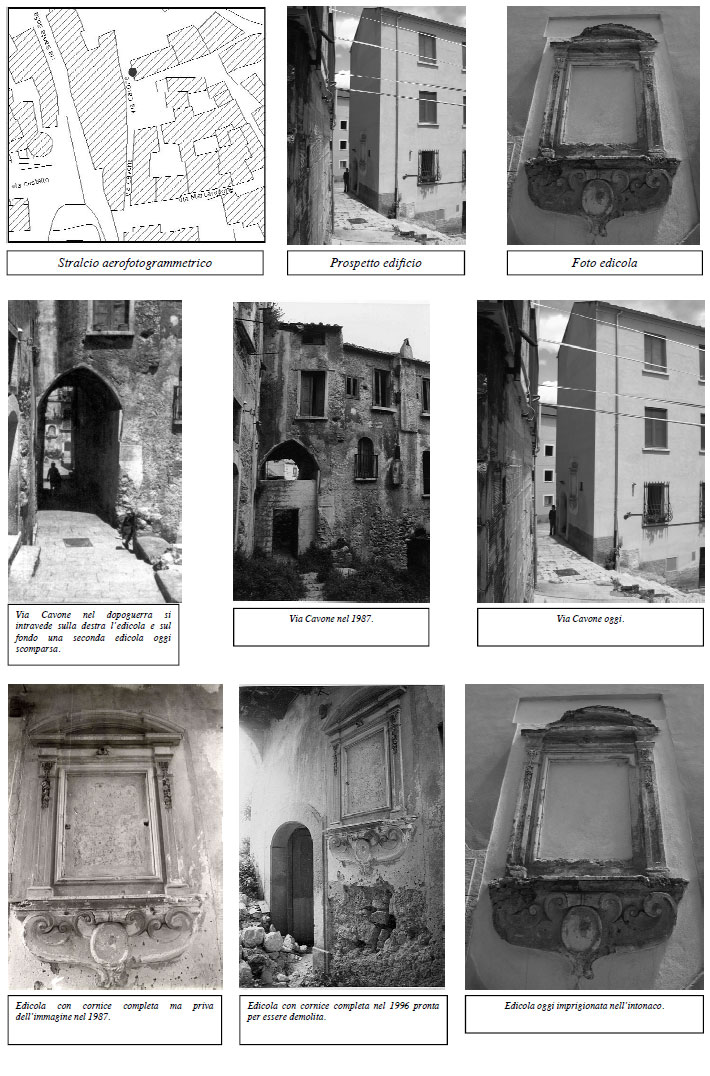 The itinerary
It begins at the church of Santa Maria della Pietà (1) and continues uphill for Corso Umberto I (the main artery of the medieval village) to Piazza San Nicola which takes its name from the church of St. Nicholas (4) it is possible to meet the first shrines placed on the facades of buildings (2.3), continuing on street Gherardo degli Angeli you first arrive at the Romano Cesareo Palace (6) and its shrine (5) a classic example of late baroque facade, and then to the church of San Biagio (7). Entering into narrow alleys, but of unique beauty, you arrive at the Palace of Marcangione (8) where you can admire the shrine of the Madonna del Carmelo. Continuing you arrive to via Cavone, which has been disfigured, but whose traces of its past splendor are the presence of the majestic remains of a shrine. Leaving via Cavone you head, through Via G. Genovese, to the Colonna Castle (10), the Martucci building(12) and the church of Santa Maria ad Intra (11). Going down by via delle monach we arrive to the Church of San Antonio de Vienne and the Benedictine monastery (13) and beside the De Consulibus/Amore and home of Matteo Ripa (14). Going down the little steps we reach the core of the sixteenth-century old town starting from square Attrizzi with its Gothic arch (15). Going through a little alley we reach a shrine, the most simple and humble of this itinerary, depicting the Pietà (16), continuing we reach Via Attrizzi where you can admire the Novella Palace (17) of the sixteenth century and the Maglione Palace(18) going down Via Maglione we enter a mix of steps, ramps, streets, portals that lead us to Via F. Francesca where we find Palazzo La Francesca (19) and the shrine depicting the Pietà (20). Continuing we arrive at Piazza Porta Dogana, ancient center of city life, from which we can admire Palazzo Paladino / La Francesca (21) and the Campagna Palace (22). Continuing on the path we come to the center of the medieval village; the monumental complex of San Francesco (23), continuing on street San Lorenzo you come to the square of the Pendino with a shrine that overlooks it and continuing the course we can see the shrine depicting the Pietà (25 ). The tour ends back at the church of Santa Maria della Pietà. Along the way, although it is not mentioned, by rising your eyes you can see frames of ancient shrines but also new shrines that are born, silently, by the will of the new people who ask for help from the Saints for them and for the whole neighborhood. 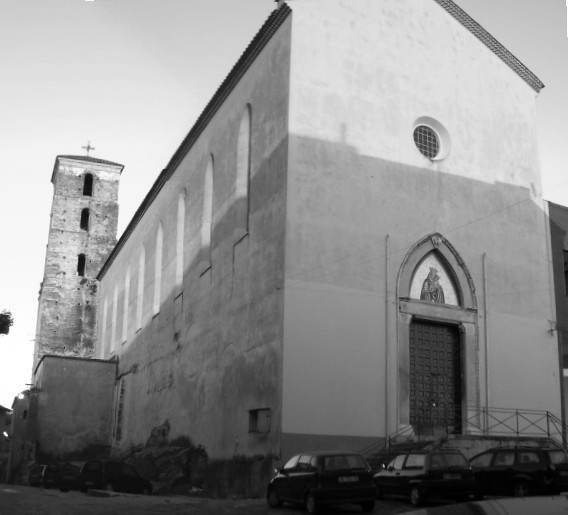 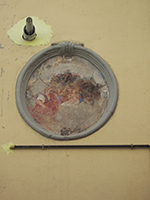 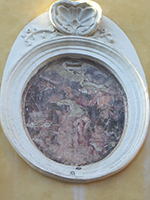 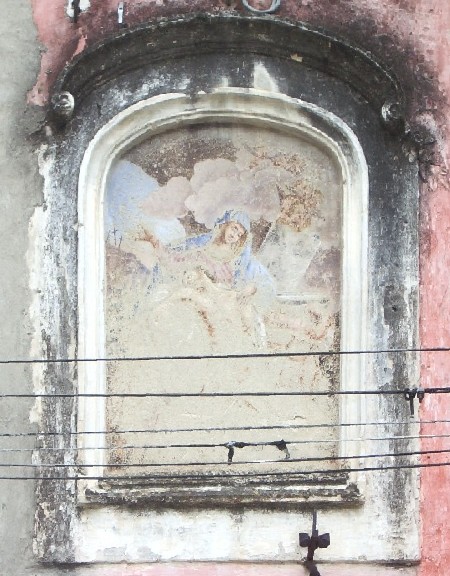 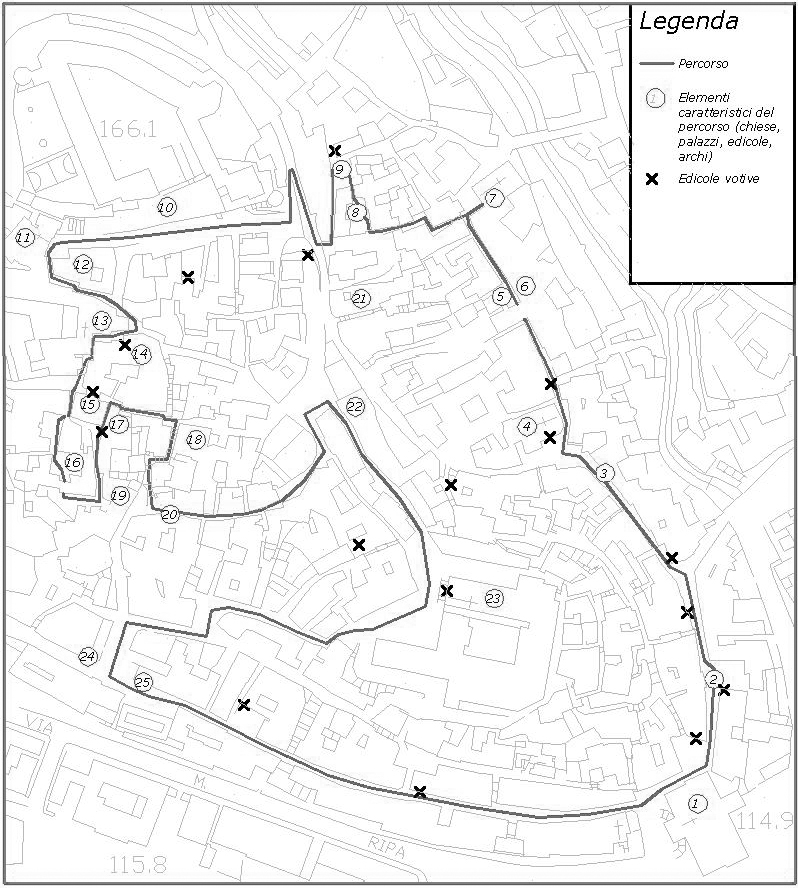 "On the recovery of religious, abandoned buildings" by Aldo de Marco CUES EDITIONS – 2006