The Martyrdom of St. Ursula 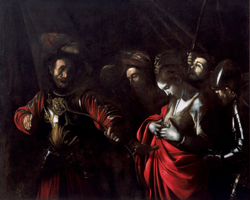 This is almost certainly the last painting by Caravaggio. The scene takes place in an indistinct and dark place. St. Ursula has just been pierced by the arrow of her killer. She bows her head and puts her hands on her wounded chest. Behind the Saint we see the lit up face of a man, trying to figure out what happened: it is the last self portrait of Caravaggio. On the Saints face we can see the clear awareness of her fate, she is surprised, yet we see no pain. She has just been attacked by the King of the Huns that had wanted to marry her. The king has killed all of Ursula’s companions and had fallen in love with her.

This is without a doubt the most documented work of Michelangelo Merisi da Caravaggio. After restoration, this painting revealed an unexpected surprise. The cleaning has revealed the presence of a hand, in the middle of the picture, between the Saint and the tyrant, positioned as if to stop the attack to St. Ursula. The hand, perhaps, symbolised the unescapable destiny as it wasn’t able to stop the arrow from killing the Saint. During the spring of 1610, just a few month before his death, Michelangelo da Caravaggio paints “The Maryrdom of St. Ursula” for the Genoese prince Marcantonio Doria, in honour of his stepdaughter Anna Grimaldi. The painting has since gone through many owners and eventually sold by Felicita Romano Avezzano to Banca Intesa, in 1973. The painting was wrongly attributed to many artist until 1980 when Vincenzo Pacelli finds the correct documentation in the Doria D’Angri archives and it is finally recognised as the Martyrdom of St. Ursula by Michelangelo Merisi da Caravaggio.
testo di Gerardo Pecci

Michelangelo Merisi, known as the Caravaggio was born in Milan in 1571 and died, perhaps in Porto Ercole and in circumstances still not well understood, in 1610. He trained in Milan at it Petrezano and then moved to Rome where his success was greatly recognised. Within just a few years important cardinals and influential men became interested in his extraordinary painting. His success throughout the years has made him become a myth. His masterpieces, for example, are in the Roman churches of S. Luigi die Francesi, S. Maria del Popolo, St. Augustine, etc. The last few years of his life, from 1606 to 1610, are the most agitated and as a consequence his pictorial work is very abundant. After a murder he committed in Rome, he was forced to flee and took refuge in Naples, in Sicily and eventually Malta. He then returned to Italy, where he died in July 1610. I his masterpieces are universally recognised as world heritage for humanity.