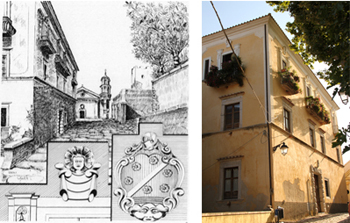 The distinguished and aristocratic Martucci family lived in Eboli since the sixteenth century and built their home on Via Castello near the church of Santa Maria in Intra. Twelve members of that household asked to become priests, three were mayors of Eboli, twelve female members became nuns and one was abbess of a Benedictine monastery. The cadastre of 1753 says: "Donato Martucci, head of household. Maria De Simone, wife. Vito, Domenico, Eleonora, Giuseppa children ...live in house of their property in Santa Maria to Intra. Owns: a house attached to his home, a home for nuns, a mill ... 103 buffaloes ..., 10 mares, 13 cows, 350 sheep, 100 goats, two horses "

In Via Delle Monache, near the Norman castle rises the noble Palace, dating back to the fifteenth century, which belonged to the Martucci family, known in Eboli in the first half of '600 so as to reach, at the end of' 700, a status of prominence both socially and for their assets. The portal consists of large blocks of ashlar stone and is surmounted by a recent copy of the emblem of the family, the original was destroyed due to the earthquake of 1980 and it depicts a band and six roses, three on each side, between a helmet, at the top, and a mask at the base. The building, with its simple massing and irregular plan has undergone expansions from the seventeenth and eighteenth century which are still visible on the second level on the sides of the balconies where there are corner pilasters in stucco with floral topped heads. To the right of the entrance is a staircase with three flights, the steps are slabs of “basolo”.