Carlo Levi was born in Turin in 1902. He was an Italian author and painter, one of the most important of the twentieth century. He had a medical degree, yet from 1923 he devoted himself to painting, he frequented the Casorati Studio. He collaborated with Pietro Gobetti and the Rosselli brothers in the editorial staff of “La Rivoluzione Liberale” (liberal revolution) and he directed “Lotta Politica”, an underground newspaper. He was incarcerated in 1934 by the Regime because of his fight against fascism. The following year he was sent to Lucania in exile. From this experience his most famous novel was born: “Cristo si è fermato a Eboli” (Christ stopped in Eboli). After being freed he took refuge in France, only to go back to Italy in 1942 to partake in the Partisan War. From 1962 to 1973 he was Senator of the Republic. He died in Rome in 1975.

Carlo Levi was born in Turin on Nov. 29, 1902, into a wealthy Jewish family of the bourgeoisie of Piedmont. As a boy he devotes much of his time to painting, an art form that will grow with great passion in his life. After completing his secondary education, he enrolled in medical school at the University of Turin. In the same period, through his uncle, Mr Claudio Treves - important figure in the Socialist Party - he met Piero Gobetti, who invited him to collaborate in its magazine La Rivoluzione liberale and introduced him to the school of Felice Casorati, around which gravitates the pictorial vanguard in Turin. In 1923 he went to Paris, where he encounters for the first time with the works of the Fauves, of Amedeo Modigliani and Chaim Soutine, by reading an incitement to rebellion against fascist rhetoric and the official Italian culture. During this trip, he also wrote the first article on his painting in the magazine L’Ordine Nuovo. He graduated in medicine in the same year and remained at the Medical Clinic of the University of Turin as an assistant until 1928, but did not exercise the profession of doctor, definitely preferring painting and journalism. The deep friendship and the continuous visits by Felice Casorati orient the first artistic work of the young Levi, with the paintings portrait of his father (1923) and the smooth nude of Arcadia, with which he participated in the Venice Biennale in 1924.

In 1931 he joined the anti-fascist movement "Justice and freedom", founded three years earlier by Carlo Rosselli. For suspected anti-fascist activities, in March 1934 Levi was arrested and in May 1935, he suffered a second arrest. This experience gave birth to his most famous novel, “Cristo si è fermato a Eboli”. In 1936 the fascist regime gives him the grace, and the writer moves to France for a few years where he continued his political activities. Back in Italy, in 1943 joined the Action Party directs The Country of the People, body of the Committee for the Liberation of Tuscany. In 1945 Einaudi published “Cristo si fermò a Eboli”. In it Levi denounces the inhuman living conditions of the rural population, forgotten by the institutions of the state, which "even the word of Christ seems never to have come." The resonance that the novel had overshadows his work as a painter.

In 1945 Carlo Levi begins a relationship with Linuccia, this relationship lasted over thirty years. After the war he continues his career as a journalist and director of the roman newspaper Italia Libera and collaborating with other newspapers. He also writes many more novels. In 1963 he goes from theory to practice in politics in order to tackle the general degrade the country was facing. He was twice electer Senator of the Republic as an independent of the Italian Communist Party. 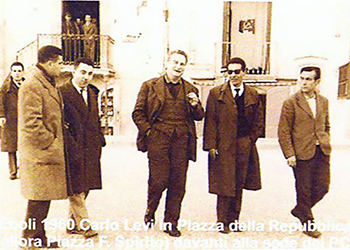 In January 1979 he undergoes two eye surgeries because of a retina problem. He returns to Eboli in the beginning of the 70s where he received an honorary citizenship. He donated several lithographs to the city. He died in Rome on January 4th 1975.