Gaetano Genovese was an architect. He was born in Eboli in 1795. He was a student of the Niccolini, with whom he work on the widening of the Royal Palace in 1824 for which he became chief of restoring and architectural decoration of the interiors. In 1837 Ferdinand II of Borurbon gave him the task of restoring the Royal Palace to the Marina. In 1839 he was asked to do some work at the Royal House in Caserta, including the creation of the throne room and the creation of a “flying chair” (similar to a lift) within the throne room. He work on the in the creation and restoration of many historical churches, noble palaces and gardens of the Bourbon Kingdom, of which he was the greatest exponent of the neoclassical style.

Gaetano Genovese, son of Nicola and Maria Giuseppa Gaiano, was born in Eboli in 1795. He studied architecture with Paolo Santacroce at the Fine Arts Institute of Naples, then in Rome. He went on to teach architectural design and in 1824 he was nominated architect of the Real Casa. He was very appreciated by the Royal Court. In 1826 he worked on two factories in Via Toledo, restoring Berio Palace and Buono Palace. His most complex work was the Reggia Napoletana. It was restored, as ordered by Ferdinando II of Bourbon, inspired by previous plans made by architects Fontana and Niccolini. The palace’s distribution was altered and given a more even layout. He also added a dance hall with frescos of dancers. 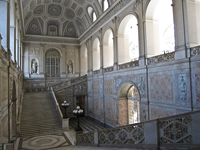 He added a splendid staircase which was only finished in 1858, he redesigned the royal gardens and widened the royal chapel. Due to the quality of his restoration work many monasteries came to know about him and employed him for the restoration of various churches. He also completed some work at the royal apartments of Caserta, where he was assigned the completion of the throne room, where, following the King’s wished, Genovese created a “flying throne” with help from Gargiulo. It was a type of wooden elevator, activated by hand. 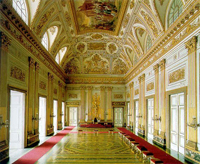 Genovese also restored the zecca napoletana, founded by Roberto d’Angiò, and added a third floor to it, similar to the first two. Genovese was also responsible for many privately commissioned jobs such as the Satriano Palace, Corigliano di Sangro palace and the Orsini di Gravina palace. In 1851 Genovese became a member of the Fine Arts antiques commity. He directed the excavations at Pompeii since august 1852, and the ones in Herculanum the following year. In the following years he works as head architect for the city of Naples, where he was responsible for urban development.

In 1857 he received an avowal as Knight of the Gran Croce of the Order of Francesco I. Genovese was author of many important works, however he never designed and built an entire building. His reputation is one of a refined decorator with great attention to detail and proportions. Genovese spent most of his career living in Salita Tarsia 132, Naples, in the Genovese Palace, restored by himself where he died in 1875.