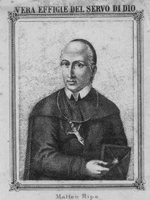 Missionary born in Eboli in 1682. Ordained a priest of Salerno in 1705. During a mission in China, in order to protect his brothers, he adapted to carry out work as a painter and engraver for the court of Beijing. Upon his return to Italy he brought back with him a group of young Chinese and founded for them in Naples the College of the Chinese (1732) which later became the Eastern University Institute. He wrote a Chinese dictionary and was one of the fist to see the importance in mutual linguistic knowledge between East and West for a better understanding of the different cultures.

Matteo Ripa was born in Eboli, March 29th, 1682, to a noble family from Puglia. His father Gianfilippo, baron of Pianchetelle, was a physician. During his childhood Matteo Ripa had a clear inclination towards the arts, but being son he could not enjoy the “pleasures of idleness” and so began to pursue a career in law. During his time in Rome he found father Antonio de Torres who’s spiritual guidance he relied on and he enrolled as a cleric at the Congregation of Priests of S.Maria della Purità. After some years he was sent to China on a religious mission, however, he was called to court by Emperor Kangxi of the Qing dynasty for his artistic talents. His landscapes were very appreciated. There he stayed for thirteen years working as a painter and making bronze incisions for the Emperor. He was given the chinese name Ma Kuo-hsien and became part of their world, adapting to their way of dressing and learning the language. At the summer palace in Jehol, Manchuria he created 36 copper plate incisions of the views, from which the Emperor printed copies for his family and dignitaries. Upon his return to Europe he brought some copies with his which were greatly appreciated in England by architects who were searching for innovative solutions for projects of villas and gardens. 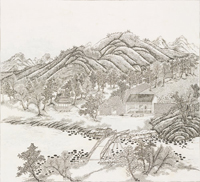 Other than being a talented painter and engraver, he was also a mechanical artist and created perfect clocks for the Imperial Court. However his mission as a religious man was the evangelisation of the lands, which he pursued both in Beijing and back in Naples. The College for the Chinese which he founded in Naples was the first Oriental Institute in Europe and it continued to grow throughout Matteo Ripa’s lifetime, thanks to the help from the popes and it welcomed young people from all over Asia.

Later on, in 1869 the italian Government took possession of the College, taking away it’s original purpose of missionary evangelisation. It is now a days the prestigious University Institute of Oriental studies in Naples. Eboli has names a school after Matteo Ripa and a bronze statue of him is present in its garden. There is also a monument built for him in Naples in 1912.