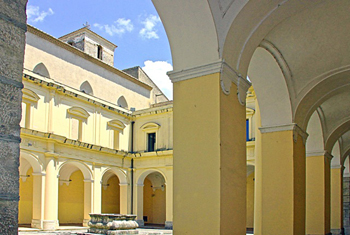 The National Archaeological Museum of Eboli and the Media Valle del Sele is located in the Convent of San Francesco. Before the Second World War it was at the town hall. The Museum collects artifacts, mostly from tombs, from the ancient center of Eboli, from the hill of Montedoro and the archaeological site of San Vito al Sele.

In the entrance hall you can find the Lapide Eburina, the sole artifact dedicated to Tito Flavio Silvano (183 a.D.) and attesting that Eburum was in fact a Municipium.

Room 1: Prehistory and Early History The the oldest findings from Early Neolithic (3500-3000 BC) and the Late Neolithic (3000-2500 BC) come from the hills of San Cataldo and are fragments of vases. Tombs from the necropolis from la Madonna della Catena date back to the Eneolithic (3rd millenium b.C.); these come from culture widely diffused in the Campagna area called Gaudo culture. From late Bronze age are the materials from one of the huts found in the Montedoro settlement which were close to the Elmice and Tiranna which from now on become a chosen spot for settlements. 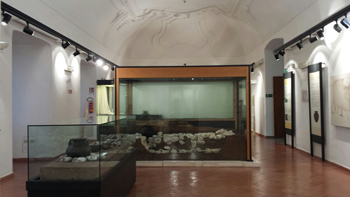 Room 2: The Iron Age The most numerous documents from the Iron age in Eboli are ones from the tobs “Tombe a fossa” which are exposed after being excavated from the necropolis near S.Cataldo, Via Matteo Ripa and around Oliveto Citra. They are beautiful; the male tombs are characterized by the presence of bronze brooches and weapons, while the female tombs contained large amounts of personal objects such as jewelry made of bronze, amber and glass paste. Some of the vases found suggest links with settlements from Val d'Agri while other decorated ceramics suggest a connection with the Enotrio of eastern Lucania. Greek type vases are also present. 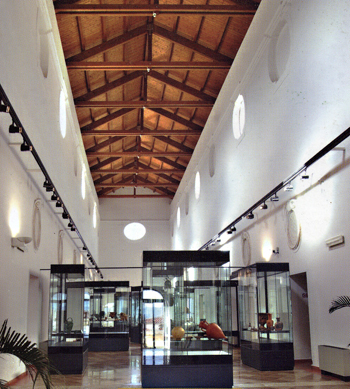 End of seventh century to sixth century b.C. The documentation of the life the Archaic period is once again exemplified by a selection of grave goods, from the cemeteries along the banks of the river Tiranna (Via Generale Gonzaga, Via GB Vignola and Annunziata area) and in the semi-flat area at the base of Montedoro. This necropolis was a special area for the burial of infants and children. The former were placed in large dough containers with lids , accompanied by ornaments and small vases. The children are buried adorned with brooches and necklaces of glass paste; and vases. Among the graves of young people some were found where the body had been cremated within its burial spot, according to greek tradition. Among the material found striking the marked presence of pottery in "bucchero". Vases were found with name written on them in Etruscan.

The fifth century b.C.: Life in town seems to diminish as the documentation from this century is vary scarce. Some vases linked to wine drinking have been found, and a cup with red figures dancing with an incision saying “ad alberello” . This is evidence of the Sanitti and Lucani conquering Campania which is also evident in burials and funerary practices.

Fourth and third centuries b.C.: Room 4 - The expansion of the Sanniti and Lucani from central mountain regions to the coastal strip resulted in their conquering of many centers such as Eboli. Burial sites are now group in families with the men being buried with their armor as a trophy. Vases and fruit sculptures in terra-cotta were also found. Women's tombs were found with bronze and silver jewelry and other personal items. Items from other areas such as Oliveto Citra and Piantito are also present in the museum.
Free entry - Info: 0828 332684