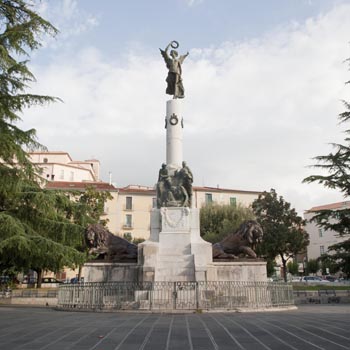 In Piazza della Repubblica, on the sides of the War Memorial, are the statues of the two iron "Lions of Eboli", for almost a century and a half one of the most representative symbols of the city. After the Italian Unification, the Ebolitan architect Francesco Paolo D'Urso met Anglo-Neapolitan engineer Thomas Richard Guppy in the competition for the construction of a bridge over the river Sele to Barizzo. When D'Urso submitted him his project to expand the city he demanded it the construction of two lions in molten iron to be installed in the great square. Guppy, believing that project was very "pretentious", promised to pay for one of the two lions if the square was actually made to the size promises. Guppy lost the bet and gave one of the two copies of the lions while the other was bought by the city to "very mild price of 2,500 lire"; it was April, 1871. They were placed on the two pedestals, on the sides of the huge gate that closed in the north face of the tree-lined avenue of the public promenade. The two lions in cast iron, weighing 45 tons each, were made by the company Guppy & Co. and gave the square its name of "Lions Square" or “Piazza dei Leoni”, today Piazza della Repubblica. When in 1924 the war memorial was opened in the center of the square, the two lions were placed at the side of it. In June 2003, the municipal government signed a memorandum of agreement with the Art School "Carlo Levi" of Eboli for the construction of an identical copy of the two lions of Guppy, realized by Storica Fonderia Chiurazzi e located roughly in the place where there were two stands at the entrance of the public promenade.