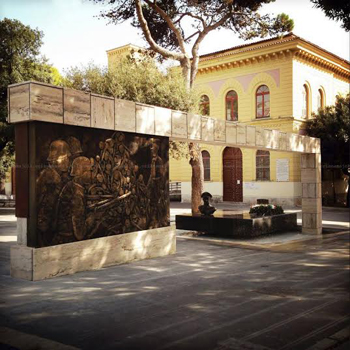 In Republic Square, at the end of what was once the Viale dei Leoni, stands the Monument to Vincenzo Giudice, gold medal for military valor, revised in 2014 on the occasion of the 70th anniversary of the death of the brave soldier form Eboili, shot by a Nazi reprisal along with other innocent civilians for whom Marshal Giudice gave up his life. The new monument is designed by architects Luca Bruno and Romina Majoli. It is characterized by straight lines in contrast with the curves of the square, in order to highlight the sense of cynicism and cruelty against the innocent and defenseless. A square is dug into the floor, another one emerges as a black monolith, as a gravestone which support the bronze bust of Marshal Vincenzo Giudice. It was created by Maestro Pasquale Ciao and made for the 60th anniversary of his death. "The monument is a true piece of reflection, where the water is meant to represent the hinge between the sad event and the joy of freedom: water that joins the tomb (regular shapes and rigid) the most joyful part breaking that atmosphere of sadness and tension towards the monument itself. Finally, the wall of water as a moment of reflection (thanks to its noise similar to that of rain) and joy that, joining with the passing on the resin floor, it becomes a moment of rupture between commemoration and joy. " Luca Bruno - Romina Majoli 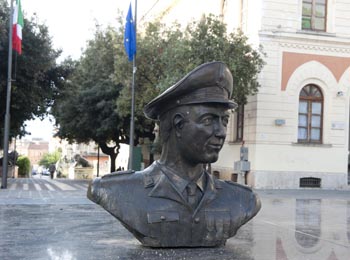 Marshal of the Guardia di Finanza Vincenzo Giudice was born in Eboli on March 24, 1891, has been called the “Salvo D'Acquisto of”yellow flames. Grandson of the illustrious jurist and politician Antonio Giudice, Senator of the Kingdom, he was brought up with a strong sense of civic duty. Enlisted in Guardia di Finanza on October 22, 1911 he was promoted to “Sottobrigadiere” on May 3, 1915. With the XVI Battalion he participated in the First World War in Albania, and was decorated with the Cross of Merit for the war. In 1920 he was promoted to Marshal Ordinary to Major Marshal in 1928. For skilled police operations he was repeatedly awarded. During World War II, while he was commander of the Brigade in Marina di Massa, a department of the SS was preparing to take retaliatory action against civilians in Bergiola Foscalina di Carrara, following the death of a German soldier. Among the hostages, more than seventy, there was also his wife and two children. The Marshal did not hesitate to confront them offering his own life to save the others. When they refused to take him because he was a military man he removed his coat and shouted “I am no longer a soldier, shoot me”. Unfortunately that afternoon of the 16th september 1944 the german soldiers killed him and the proceeded to kill the rest of the hostages, including his wife and children. Because of this act of heroism he was awarded the golden medal of honor with the following statement: “Sottufficiale della Guardia di Finanza, avvertito che la rappresaglia tedesca si apprestava a mietere vittime innocenti fra la popolazione civile, si presentava al Comandante della formazione delle S.S. operante offrendo la propria vita pur che fossero salvi gli ostaggi tra i quali la moglie e la figlia. Di fronte all'obiezione essere egli un militare, si liberava prontamente della giubba ed offriva il petto alla vendetta nemica. Crivellato di colpi, precedeva i civili sull'altare del martirio” The historical schools in Piazza della Repubbli are dedicated to Vincenzo Giudice. The monument dedicated to him is in front of these schools. So are the local barracks of the Guardia di Finanza.