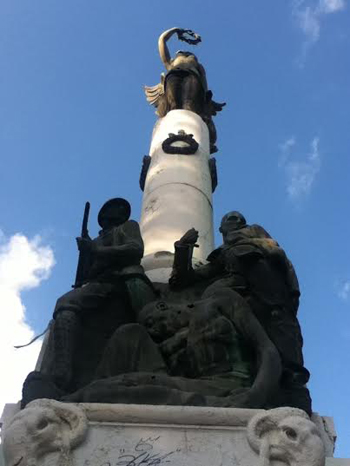 At the center of the ellipse of the central Piazza della Repubblica, stands the Monument to the Fallen of the First World War. There was talk in the early months of 1923 about the building of this monument that would serve to remember the sacrifice of the soldiers from Eboli (132) who died during the Great War. The initial cost of the monument 85,000 lire. The works of adaptation the square for the accommodation of the Monument to the Fallen were established according to the project prepared by engineer Antonio Storniello, at a cost of 110,000 lire (figure at the end of the work turned out to be much higher). The pro Monument Committee, to raise the money for the monument, organized a charity event on the 21st of april 1924. Part of the metal alloy used for the monument was obtained by the fusion of a bell owned by the town,unused, in the church of S. Maria delle Grazie. The making of the bronze statues (Winged Victory and the dying soldier) was entrusted to the sculptor Pellegrino (some say Picentino Marotta). Around the monument was built a curb stone cutting performed by the company of the stonemasons of Eboli on which was fastened an iron railing. The inauguration of the monument took place on December 7, 1924 to the delight of many Ebolitans. The 63rd Infantry, the Undersecretary of the Ministry of National Economy SE Bacelli, representatives of the Ministries of the Navy and War and many other national, provincial and local authorities participated to the event. After the ceremony the following inscription was revealed, still visible on the monument, work by Felice Cuomo: