Folk characters and their stories and struggles represent a treasure of illuminating wisdom and a piece of local history. They become part of local collective memory and of community spirit. In Eboli these characters are still present in local music, theatrical productions and literature. 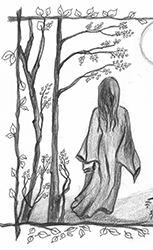 Marialonga: “Anema Longa” or “long souls” is what people that are very tall and skinny were called. Almost ghost-like, with an air of immateriality. The character most remembered for these traits is “Maria Anema Longa” or “Marialonga”. It is said that she was a refugee that lived at the Church of Maria del Soccorso. People used to mention her, making her sound scary, to precent accidents from happening, for example, if a parent saw their child leaning out of a window they would say: “Don’t lean out too far of Marialonga will pull you down”. 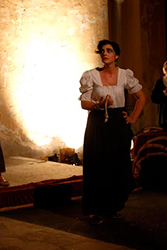 ‘A Strangulatora: In Eboli as in other parts of Italy there used to be a person people referred to when someones death approached in other to help them cross over. This person was called the “angel of good death” but in Eboli she was more commonly called “A Strangulatora. She was a woman who’s job was to lessen the pains of those who were about to this earth. This jobbed was passed on from mother to daughter. The woman gave life and she took it away. The church condemned this job as it was seen similarly to how euthanasia is seen today. The family of the “Strangulatora” lived in the “Caccone” area, which is now Via Cavone, generation after generation. They were not wealthy, as getting payed to help someone brought bad luck. A few people brought them food and only the most wealthy people gave them small sums of money.

When her help was required, she would be called late at night, when the sun had completely set. The relatives would kneel and pray around the dying person. Once she arrived they would leave the room and shut the door or sometimes even leave the house. The Strangulatora would stand by the dying person, she would invoke Christ and after asking for forgiveness for the actions she was about to commit, she would suffocate the dying person. Sometimes she would need to use a wooden plank to hit the person on the head, but this was only done after the doctors had confirmed that there was nothing left to do with the patient. After she was done she would remain by the person and pray, either for forgiveness or to make it seem as if she had brought the death through prayer, as that was officially what it was said her job was. She would arrive and leave completely dressed in black and covering her face with a hood, as no one could know who she really was.

Isabella Marcangione was a young woman who lived in Eboli in the 15th century, she was part of one of the most shady noble families of the country. Her brothers were so jealous of their only sister that they would not let her leave her room. They made the city’s processions change route so that they would walk past her window where she would sit and watch the procession behind bars. She was madly in love with a young man that was from a rival noble family in Eboli. Isabella was victim of her borther’s jealousy and they built a wall to never let her leave her room, where she died of hardships and of pain for the love that she could never achieve. Sonnets have been dedicated to Isabella’s tragic yet romantic story. 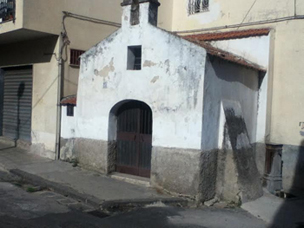 Ze' Culonna: Ze’ was an old lady that lived alone in a small house in the Ceffato area of Eboli. No one knew how she could survive living alone. She became well know for her reply when people asked her what she cooked: “I heat up some water with fire, I add a pinch of salt and I pour it over some dried bread or a biscuit”, a very humble meal. One day two curious women who wanted to try this now famous “acqua ‘e ze’ Culonna” went to the old lady’s house hoping to help her cook it. When they arrived she was already eating and to their surprise her meal was actually eating “’o ciauliello” a deliciously tasty Ebolitan dish. 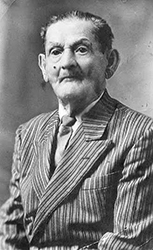 'U Lampiunaro: At the end of 1800 the City still didn’t have electricity and in order to keep the city lit some gas street lamps were lit every night. The person in charge of lighting the lamps was referred to as “‘U Lampiunaro”. He lit lamps on the city’s main central roads and squares but the rest of it remained badly lit throughout the night. To cross these parts of the city without being scared people would run, sing or pray.

The last man to have this role was Alfonso Visconti, known as Zì Fonz ‘u Lampiunaro. He was born in 1855 and died in 1957 at the age of 102. He was very loved and became part of the history of Eboli. During his lifetime he witnessed many important events such as Garibaldi’s stay in Eboli, the killing of King Umberto I of Italy, the unification of Italy and the two disastrous world wars and the tragedy and misery that followed them. 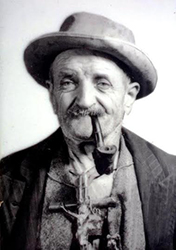 Sciascone: Vito Furcillo, 1893, nicknamed Sciascone was well know in Eboli for always having a flask of wine with him. He never said no to wine. One time he got sick and the doctor told him he was not to have any wine until he got better. The doctor asked his friends to remove the barrel of wine that he kept in his room to avoid the temptation. His friends put the barrel in the little wooden deck above Vito’s room. The next morning they found Vito looking very happy and smiling in his bed so they decided to lock the door to the deck to stop him form getting up to get wine at night. Even after locking the door they found Vito drunk the next morning. Once he got better and his friends gave him the key to the room with the wine he said he didn’t need it any more as he had installed a little tube going from the wine, through a crack on the wooden floor and down to his bed and he had already finished all the wine. He was drunk and happy. 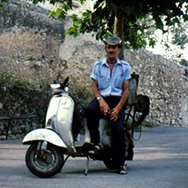 Pastetta 'o molafuorbece was an "arrotino" (person who travelled around city's to sharpen people's knifes and utensils). One day he was working in Potenza and stopped to have some food, he enjoyed the wine so much that e got drunk. The officers of the city heard about the drunken man and went to ask for his documents; not being able to show any Pastetta was arrested. As they took him to jail he kept saying he was friends with "Rumenicantonie Iorge" who had baptised his daughter. That's when the president understood that the man was Pastetta 'o molafuorbece and he was "rumenicantonie Iorge" or better Magistrate Antonio Domenico Giudice. Pastetta was released. 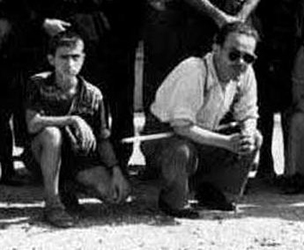 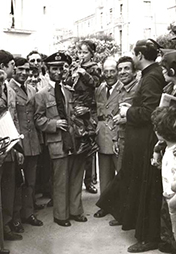 Zazà or Francesco Bombace was born in 1920 in Eboli. He married Emilia Papace. He had many different jobs, for many years he was in the army, he did magic tricks and he played the drums in the band “I Sorrentini”. He was a joyful person with a happy heart, he always smiled at everyone. He died in 1990 and to this day, in Eboli the term Zazà is used to describe a playful happy person. (“You are such a Zazà”)