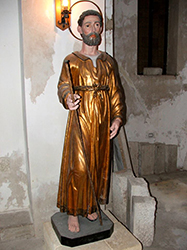 As in every tradition, the sacred and the profane mix, creating legends so old they are hard to date. In Eboli some of these legends are based around the figure of Saint Berniero. He was a Spanish man born to a wealthy noble family during the first half of the tenth century. From a very young age he despised all the vanities of the world. He left all his belongings and began his pilgrimage to all the major sanctuaries around the world. He arrived to Eboli and settled, in complete poverty, in a small cove beneath the convent of San Pietro alli Marmi. He fell in love with the city and even though he didn't belong to any religious order he helped the monks, the poor and the suffering. Soon his cove became a destination for pilgrimage, people would ask for his blessing and for help with their troubles. To help an old man he was able to bake bread without fire or wood. This was a miracle.he helped build convents and a bridge which according to the legend is so strongly built that it will miraculously withstand any blow. He died in Eboli, the date is unknown. His body was a lowered down to his cove and the legend says that in that moment the Miracle of the Oil happened. All the oil, which was frozen due to the weather began to thaw and grow in quantity overflowing from its flasks, so much so that it flowed into the streets and people were able to collect it and store it for their own use. From the body of the Saint a soft perfume start to diffuse and the bells began to chime on their own. On October 16th, 1554 the remains of the saint were found and at that moment, after months of draughts it started to pour with rain. His cove is still standing in Eboli, there is a fresco of the Saint inside it. He is remembered every year on November 20th.

San Vito was born in Mazara del Vallo, after his mother’s death he was raised by Modesto who converted him to Christianity. At the age of seven he started performing miracles, and became well known for it in the area of Mazara. In 303, when the war of the Roman Empire against Chrstianity broke out, Vito was arrested. After being released he continued to perform miracles until he was tracked down by the soldiers of the Diocleziano and brought to the Emperor.

The Emperor had heard about his healing powers and wanted him to heal his son who was epileptic, a very scary condition at the time, as people thought the affected might be possessed. Vito healed the boy, but the emperor ordered he be tortured as he had refused to offer a sacrifice to the gods. The legend says he was immersed in a cauldron of boiling tar from which he came out unharmed; they threw him in with the lions which just licked his feet. The finally hung him on a hook to be beaten but the earth began to shake and the idols crashed to the ground the soldiers ran away scared. Angels appeared and took his exhausted body to the Sele river where he died on June 15th, 303. He is remember on this day every year. 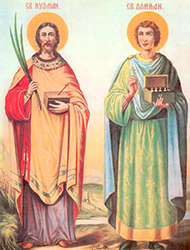 The worship of SS. Cosima e Damiano, the Medic Saints, was brought to Eboli by a colony of greek origins around the year 1000. Around the 18th century the worship of the saints grew stronger and a church was built for them.

San Antonio in worshipped in Eboli at the Church of the Hooly Trinity or Church of S. Antonio da Padova, in which the miraculous statue of the saint is kept. It is said that a member of the Marcangione family had lent a great sum of money to the guardian of the church. Not seeing his money payed back he demanded for the statue of San Antonio to be transferred to his personal chapel. That night, the saint appeared to Mr and Mrs Marcangione several times. It was a haunting presence and the appearances tormented them. The next day they had the statue put back in its original spot and it hasn’t been moved since.