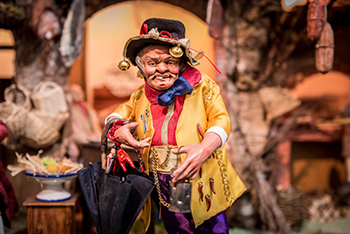 Popular beliefs represent a real imprint in cultures, which last for centuries. They are usually passed down orally through generations, they aren’t proven facts or happenings and they usually border with superstition which leads to a belief in myths and legends linked to natural facts. In the middle ages it was believed that people possessed by the devil could spread mischief around them solely with their look. Many of these beliefs are link to fortune and misfortune. One common belief is the “malocchio” (bad-eye), which is the power of the eyes used produce negative effects on the person looked at, like bringing bad luck to enemies, also rarely believed to bring good luck, like protection of our loved ones. In the Neapolitan tradition, to which the Ebolitan tradition is closely linked to, a jinxed is described as someone skinny, pale, with a slightly curved nose and generally dressed in black. Still today, in some places, some people will be identified as jinxes. In Eboli when you see a jinx you say: “Chillo è cient’e otto”, and you must be careful, not pronounce their name and make superstitious gestures if you encounter them.

Whoever has a strong headache has been “pigliat’ ar’ uocchio”; victim of the “malocchio”. The malocchio is attributed to the envious and evil thoughts of some people. There are many rituals to get rid of the “malocchio”, one that is more frequently remembered is get some coals on a pallet, add a little insence, a holy palm branch, add a spiderweb on top of everything and pass it over the afflicted person’s head without touching it. Another one is to put a knife on the afflicted person’s head and say an “Our Father” or three “Hail Mary”, then with a rapid movement flick the knife towards a fire in order for the bad luck to fly into the flames. It must be a rapid movement to prevent the bad luck from transferring to another person. To find out who put the “malocchio” on a person you get put some water in a plate and then pour a few drops of oil in it, this way you can figure out wether it was a male or a female. The “malocchio” is put on good looking people or those that have something that is envied, but if they carry a horn or a number 13 nothing can happen to them. For defence against the “malocchio” you can place an open pair of scissors underneath your bed. Another way is to have a lit fire. If the fire makes crackling noises then someone is speaking badly about you and you must spit in the fire to counteract the effects of the “spell”. A way to cast away a light “malocchio” was to pray to God and Saints and make the sign of the cross on your forehead. For stronger ones one had to reach out for the help of witches and sorcerers. 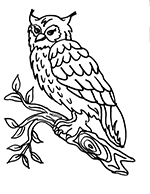 The population of the plain of the Sele was attached to beliefs such as the one of the screeching of the owl. At night, a screeching owl was bad luck, especially if it screeched while looking towards you, it meant bad news such as a death in the family. To make the owl fly away one had to pronounce the following formula (still used today): "Ronna Aurora vottma sta frussola ch'aggia coce st'auciella ca canta a chest'ora”, meaning: Aurora turn this pan for me, as I need to cook this bird for singing at this hour. Other animals thought t bring bad luck were the bat and the black cat. In the middle ages all cats were banned as they were a sign of the presence of evil; they were considers witches’ favourite animals because of their habit to go out at night. Black cats, being less visible at night, scared horses, making them jump and throw their riders to the ground. This is why people thought that black cats brought bad luck when they crossed the street. In order to get rid of their bad luck one had to take three steps backwards, wait for someone else to cross the road before us or better yet, take a different road.