Folk beliefs are often closely linked with superstition, giving credit to unproven facts and phenomena and leading to believe in mythological characters and legends linked to natural facts.

One of the most widespread of these beliefs is the one of werewolves which in Eboli are called “Pumpnari”. Legend has it that people born on Christmas night with a full moon would undergo a unexplainable transformation on every full moon. An old local story says that every full moon night a werewolf would go to a lady’s house. She would open the door expecting to find the good man she knew, but instead would find herself facing a terrifying creature that would claw her and leave her bleeding on the ground. The lady, needing to find a solution to this repeating nightmare, turned to an expert, the local witch, who told her to prick him on the tight with a needle. The lady did this, expecting the creature to revenge and hurt her even more, instead he turned to her kissed her hand and thanked her for freeing him from this spell. He was now a normal person again and was no longer burdened by the heavy duty he had to pay to the moon. 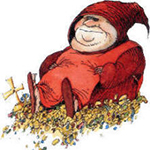 Another mythological character is locally called “ ‘O Scorzamauriello”. The name most likely derives from the greek words “Scopticos” meaning “joker dwarf” and “mauros” meaning barely visible. These are intact the main characteristics of this mythological figure. They are described as tiny being, that run around and who’s biggest pleasure come from playing tricks on people. They tickle sleeping people’s feet and pull their sheets off the beds, they throw sand in people’s eyes and knock over glasses full of wine, they hide in the wind and make cards fly away and make clothes fall from their hanging lines, they pull chairs away from people about to sit down, they hide objects, they pinch, pull hair, they sting and whistle like mosquitoes. They are annoying yet completely innocuous, they will never harm anyone, just play and are completely innocent. They wear a big red hat, bigger than them and they must never lose it. If they do all their joy disappears and they cry until they find it. One way to defend yourself from the gnomes’ tricks is to try and grab them by their hat. They will throw themselves at your feet and beg you to give it back. These little creatures hide great wisdom beneath their playfulness. They know everything about the underworld and they know the hiding place of all great treasures. To get back their hats they will promise to reveal to you one of these hiding places. You must not give them their hat back until they have revealed the secret to you or else they will take they hats and with a great leap they will disappear laughing and will not keep their promise.

Every year in Eboli on the 31st of October a event is held to celebrate this playful gnome.