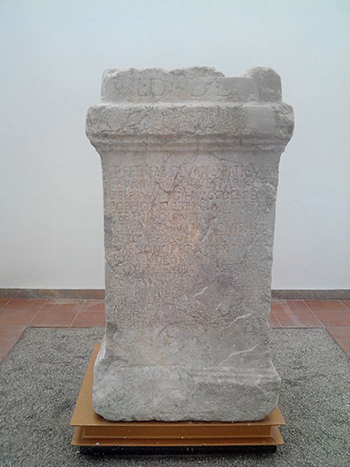 In Roman times Eboili was situated on the path to Lucaria that the Romans adopted to build their road Popilia or Regio-Capuam on. The presence of this 132mile road might be the explanation to the romanisation of Eboli, as it was a passage way that opened up the south to Rome and their military and political conquer of it; although wether the road directly crossed Eboli or if it went around it is not known for sure.

Eboli became a municipium in 183 AD, when Commodus was emperor. This is proved by the inscription fond on the “Stele Ebuina” pedestal, discovered in 1903 and inserted in the bell tower of S. Maria in Intra. Further proof of Roman presence in Eboli is attested by the finding of the artisanal quarter in the town of Ss. Cosma e Damiano, the Roman villa in Paterno, the base of a statue dedicated to Tito Flavio Silvano and a river port in Aversana.

The reason for the scarcity of Roman remain in this area is the destruction of the city due to the passage of the Visigoths led by Alaric in 410 AD, the devastation after the Saracen invasions in the ninth and tenth centuries and human carelessness throughout the centuries.