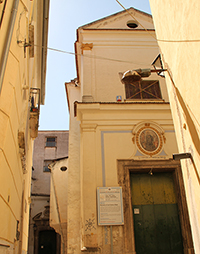 The Monastery of the nuns of S. Antonio (also known as "S. Antonio de Vienne") was founded under the Rule of St. Benedict around the XIV century outside the city walls in a pleasant place. There is no historical documentation for its first two centuries until May 1503 when, because of the civil wars, the University of Eboli wanted to protect the nuns who were outside the city walls and made them move from their monastery to the place where they currently still, near the castle Colonna. In 1568 their new home was modified and expanded. In 1617, according to the pre-registration of the Council of Trento, seclusions were established. In 1656 the plague reduced the number of nuns to only three, and with their death the monastic order also ceased and was only reopened in 1700. In that time the monastery had fifteen cells divided into two dormitories and other necessary workshops with garden, cistern of water and a church choir. The complex was restored in the style of the late Baroque and assumed the form that still can be admired.

In 1774, Maria Carolina of Austria, Queen of Naples, on the occasion of "Persanicam venationem" of her spouse Ferdinand IV, visited the Benedictine Monastery of S. Antonio de Vienne, as evidenced by a plaque in the hall of the monastery. With the revolutionary laws the Benedictine community was suppressed, but in spite of the numerous orders of the exodus the Benedictines did not leave the monastery. Economic problems, however, put their stay in Eboli in danger several times. For this reason, in the early years of this century, they decided to establish a school of embroidery that would allow them to bear the costs and not to be driven out of the monastery. After the opening of the school took place in 1913, on the feast of St. Benedict, the Benedictines lived thanks to many other female driven industries: production of honey, sewing, embroidery, cutting, sweets for festivities. The bombings of 1943 did not spare the monastery, so the community had to take refuge in the church of Santa Maria La Nova in Campagna.

The main access to the complex is from Via delle Monache; through the main building of the monastery, you will reach an atrium with coloumns. The end of the main building of the complex is occupied by the church of St. Anthony de Vienne and the adjoining sacristy. At the bottom, between two corner pilasters, there is a doorway topped by a medallion of St. Benedict and St. Scholastica. The façade is completed with a triangular oculus. The Church has a single nave in late baroque style divided into four bays. The first is covered with a vault, the third has lowered dome and the remaining with vaults. The sides of the nave are divided by a row of pilasters with Corinthian tops, on which the frame rests. Down the aisle is located the main altar in polychrome marble we see a painting from '700 depicting "the Coronation of the Virgin with St. Anthony Abbot and St. Romuald, St. Benedict and St. Scholastica." Other paintings add to the church decoration: one on the right wall depicting "San Michele Arcangelo" of the eighteenth century, and the other on the opposite wall, depicting the "Holy Family with God the Father" of the seventeenth century; the two marble holy water fonts of 1653 and the valuable jealousies of inlaid wood placed in the upper part of the nave, contribute to enrich the environment.