The monumental complex of San Francesco 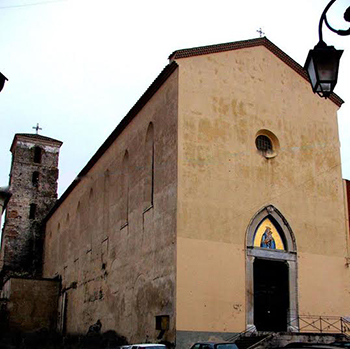 The monumental complex of St. Francis of Assisi in Eboli dates back to 1286 and is one of the first Franciscan settlements historically documented. The building complex underwent several interventions over time. In 1349 the bell tower was restored, in 1586 the entire complex was modified according to the fashion of the time. The complex remains like this until August 7, 1806 when its use was suppressed by the Napoleonic laws. In August 22, 1811 the church opened for worship, while the spacious rooms of the monastery were used as a town hall and scholastic functions. The structure was severely damaged by bombing in 1943, but while the church was restored and reopened for worship in 1958, the monastery was left in ruins. Only in 1993 the convent was reopened. 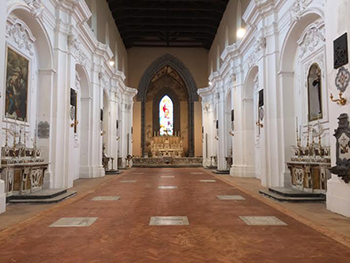 The church, built in the Gothic style, was updated to eighteenth century taste with baroque decorations. The war unfortunately caused the destruction of baroque decorations consisting of spiers, side columns and a large window, now replaced by an oculus. Of the ancient facade remained intact only the simple Gothic portal with pointed arches, decorated by a carved frame. The building which was located to the left of the facade was also destroyed. This is evident because of the presence of a fresco outside which wasn’t destroyed. The interior of the church underwent a restoration in 1957, in which the most important stylistic motifs were kept (Gothic and Baroque). Each polychrome marble altar has jus Patronus of an Ebolitan family. 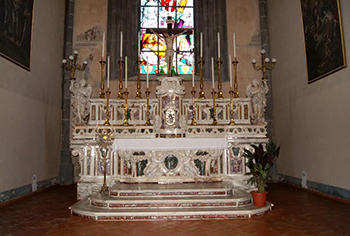 Starting from the entrance on the first altar on the left, you can admire a painting of Saint Lucia and St. Bonaventure of the eighteenth century, attributed to Paolo de Matteis. The altar belongs to the Romano family Cesareo. On the second altar is "The Crucifixion" (1720 - 1750) of the master Nicola Maria Rossi (Naples 1690-1758), commissioned by the Mirto family. The third altar holds the statue of Our Lady of Carmelo, belongs to the Campagna family. Finally, the fourth altar is graced by a statue of the Immaculate. On the opposite wall, the first altar belongs to the Viviani family. The second altar is a statue of St. Vincent Ferrer and belongs to the Novella - De Cristofaro family. The next statue is of Saint Irene, patron Saint of Eboli. On the fourth altar is the painting of St. Gerard Majella. The whole cycle takes on a precise meaning of exaltation of Christ and the Virgin expressed in the figures of the Patriarchs and Prophets and the Messianic prophecies. 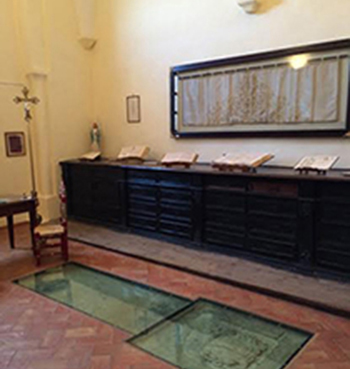 The main altar is of polychrome marble from the first half of the eighteenth century and in the great tradition of Mediterranean baroque style. In the sacristy, you can still see the marble tombstone of Miles Potifredo 1324. A tangible sign of the chapel is the presence of a stone portal that reads an inscription dating back to 1521.

The monument houses the Municipal Library Simone Augelluzzi, which boasts a total asset of about 19,000 paper documents and multimedia. The core of the town library consists of the collection of books of the "Federation of Ebolitan Libraries ", founded by Fr. Simone Augelluzzi in 1926 and donated to the City of Eboli by Professor Paolo Merola, student of dell'Augelluzzi, and who guarded carefully the valuable library materials and documentary inherited from his teacher, and delivered it safely to future generations. The library also houses the photographic archives of Luigi Gallotta: through a collection of 45,000 negatives in films and plates of various kinds, he tells a faithful and at the same time fascinating history of Eboli and the plain of Sele, documenting the many events, often dramatic, that have taken place in this region from 1920 to the nineties. The former Convent of San Francesco now houses the National Archaeological Museum of Eboli and the Media Valle del Sele.