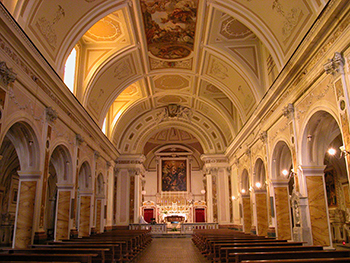 The S.S. Trinità Conventual complex, with the adjoining Church of St. Anthony, is built atop a hill on the north-east of Eboli. In 1490 the friars, also called Zoccolanti, built an impressive convent starting from the small Church SS Trinity de Turello, which was already a parish since 1172. From then on began various stages of expansion of the church and many noble families acquired the right to have a chapel and a burial in the church. In one of the chapels is placed the miraculous statue of St. Anthony of Padua, which now identifies the Church.
The entrance portal, in stone of Eboli, is from 1558. It is inserted in a pattern of two columns in the middle, placed on bases in Doric style, on which are represented the Franciscan coat of arms. The work presents similarities with the portal of S. Maria delle Grazie in Eboli and is even comparable to that of St. Maria della pace in Montecorvino Rovella. The latter was done by stonemason Verderosa and therefore the portal of St. Anthony is by the same master. The church, one of the largest of Eboli, is rectangular, with three naves. At the entrance there is the choir stand, made of wood decorated with arches, built by Diego Foti from Sicignano in 1768. The choir maintains the organ, that fairly recently, was played by the poet and musician Felice Cuomo. The floor is made of ceramic tiles. The central nave is decorated with a fresco commissioned by the Genovese family by the painter Desiderio Constantino in 1802. The fresco is of one of the miracles of St. Anthony: a mule kneels before the Blessed Sacrament that shows the saint, ignoring the fodder that is offered. 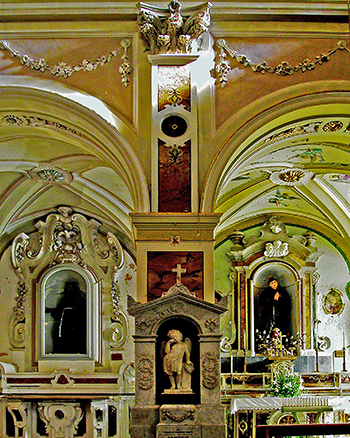 The church has a rectangular plan with three naves. The central nave is covered with frescoes. The sides of the aisle are punctuated by round arches set on square, decorated pillars. After the "riumphal arch there is the presbytery with a lowered square dome. The aisles are separated by round arches, set on decorated pillars. The aisles are presented with vaulted ceilings and altars have six on each side, with several tombstones, belonging to the noble families who had bought the rights. The altars of the left nave:

After this altar there is a door leading to an organ in polychromatic wood, work of great value, carved in 1768 attributed to Diego Fort Sicignano. Further inside the nave there is an altar with a painting dedicated to St. Francis de Sales. After this there is a wide chapel: in the niche on the left there is a statue of the Madonna della Libera; in front is a wall with a painting dedicated to the Madonna della Libera, painted by Capozzoli. In the niche on the right there is a statue of St. Anthony in Glory. The transept in polychrome marble, donated to the church by the people of Eboli, as the inscription on the floor testifies, introduces the triumphal arch under which appears once again, the Franciscan coat of arms. Under the vault of the apse there is the main altar made of marble. On it is a canvas depicting St. Mary of the Assumption, a copy of the precious cloth of Sarnelli. In the nave, on the floor, is placed a tombstone of the Genovese family, with the polychrome emblem, depicting three towers and a crowned rampant lion. The same coat of arms is visible on the fresco of the vault. 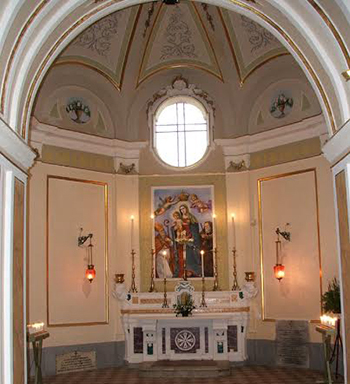 Right nave (from the main altar to the exit): in the inner dome is a wooden statue of San Michele Arcangelo and above is a small fresco that reproduces the same scene. Continuing we see the door leading to the sacristy and confessional, behind which there was a door to the convent. The altars of the right nave: 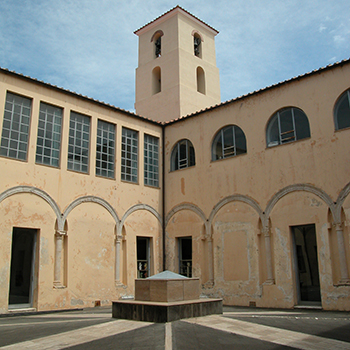 The Convent, next to the church of S.S. Trinità retains almost intact the it's Renaissance construction setting, respecting the Franciscan ideals of simplicity and poverty. A manuscript from 1600 says that the monastery "is very beautiful, formed by a landing where there are kitchens, pantries, refectory, chapter room and three dormitories on the upper floor, with twenty rooms." It is square shaped and spreads over two levels. Through a portal located beside the entrance to the church, you enter a cloister bordered on four sides by a portico covered with vaults. This monastery participated in the life of Eboli and it is where the people have gathered to elect the new mayors. In 1806 the monastery was occupied by French troops and suppressed. The church was reopened in 1811, thanks to the pressing demands to the King, the clergy and citizens of Eboli. In 1818 the fathers reopened the convent which remained open until the definitive abolition of 1866, when the property was transferred to the City of Eboli which gave a wing of it to the Pii Fathers to take care of it. They continued to offer their spiritual and social services until 1908. The premises were acquired by the city and turned into the School of Agriculture, later named Agricultural Technical Institute, and since 1992 is the base of the Art School Carlo Levi. It currently hosts the M.O.A. - Museum of Operation Avalanche. 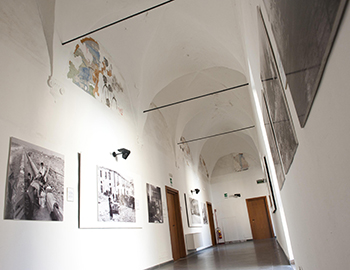 From the sacristy of the Church you can access to a vast ambulatory surmounted by vaults. On the inner walls of the cloister develops a vast decorative cycle, belonging to the original decoration of the late sixteenth century, depicting episodes from the life of St. Francis of Assisi and St. Anthony of Padua, attributed to the painter from Eboli Ottavio Paparo. The decorative cycle was brought to light only partially thanks to a meticulous restoration in 2002. The frescoes unearthed depicting the following:

Other unrestored frescoes, are present on the walls of the refectory and represent scenes of the climb to Calvary. The cloister is composed of 10 arches which rest on 20 columns. These arches display the coat of arms of the noble families from Eboli who had contributed to the construction of the convent.