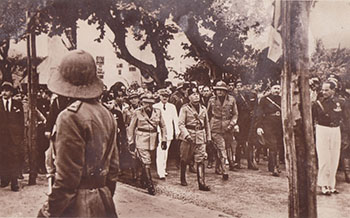 OnJuly 6, 1935, the city of Eboli was chosen by dictator Benito Mussolini for a bellicose speech know as "I do not care!", anticipating the imminent war in Ethiopia. During World War II, on August 4, 1943, Eboli suffered a massive aerial bombing that destroyed many of the civil construction. September 9, 1943 the City was involved in one of the most important episodes of World War II: the Anglo-American strike, called Operation Avalanche, on the coast south of Salerno, which paved the way to the allied army for the liberation of the peninsula. The post-war period is characterized by the reconstruction of all the destruction, with the creation of the districts of Molinello and Paterno, while in the former sports camp "Littore" the church of San Bartolomeo is built. The fifties were the years of agrarian reforms. In Eboli this equalled the expropriation of 7500 hectares of land and the creation of several farms that give life to the villages of Cioffi, Scanno, San Cesareo, Santa Cecilia and Fiocche. 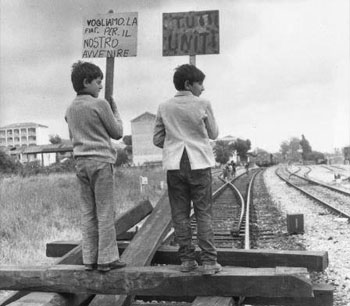 In the sixties the Ebolitan population greatly increases because of both the baby boomers and immigration from neighboring countries due to the economic boom experienced in Italy in those years. In this period different industries are born which are related to the processing of agricultural products especially in the food processing sector. Along with this phenomenon of spontaneous industrialization other industries are born such as manufacturing related to development plans for the South. These years are characterized by the protests that culminated with the uprising of 1974, triggered by the decision not to build the a Fiat establishment in Eboli. It was the period of relocation of large industrial activity from Northern to southern Italy: a first planned relocation was to move the Aeritalia-boing to the Sele plain but it was later redirected to Foggia.

The eighties start with the tragedy of the earthquake that struck on November 23, 1980 in Irpinia with epicenter at 40 km from Eboli, causing the collapse of some buildings, damage to schools and causing two victims. Following the earthquake large sums of money pour into Salerno although these were partially intercepted by criminal organizations. In these years the modern center is developed.

The nineties are characterized by the fight against crime. The decade ends with the demolition of illegal houses on the coast: on 29 September 1998 the bulldozers of the army knocked down seventy houses. The remaining 112 houses were demolished in 2000.