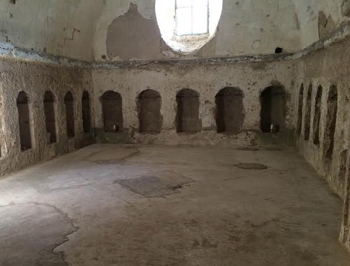 Colatoio dei morti or “o' scola muort” in dialect translates to colander of the dead. This area was situated below the priestly area of the church of St. Francis, in the heart of the Old Town. It was a funerary hypogeum used as a decomposition chamber for cadavers. This practice was spread throughout the southern regions of Italy between the seventeenth and nineteenth centuries. This treatment was reserved for the elite citizens, regardless of religious beliefs. The bodies were lowered into chambers in a sitting position to allow liquids to leave the body as the decomposition process advanced. Once the soft matters had decomposed and disappeared the bones would be gathered and washed with vinegar and the bones would be put in an ossuary, except for the skull which was exposed on a stone shelf. 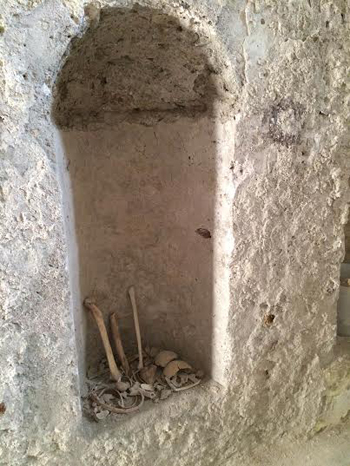 You can access this site through a staircase and two ramps which lead to a vaulted compartment measuring 16,35m by 6m and is 5,40m high. There are 32 niches for cadavers along the walls of the chamber along which is a stone frame where the skulls are exposed. The drainage holes once present are now covered by a more modern flooring. During the excavations in 2011 rock with a 1,5m deep hole was also found, this was most likely used as the ossuary. A small window on one of the chamber's walls was the only source of natural light available. Marble remains seem to indicate that this site had an altar for funerary functions.