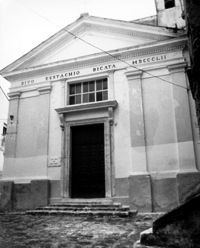 The church of St. Eustacchio and S. Biagio is located near the river Tufara at the top of the old center of Eboli. Mentioned for the first time in October, 1242 under the name of Saint Eustace. Since 1308 the church of St. Eustace is documented as a parish church. Previously the entrance to the church was facing the door of S. Eustacchio, also known as S. Biaggio or Barbacani. The interior looks like a large hall with a flat ceiling and ends with the barrel-vaulted apse flanked by two semicircular niches. There is a frame running along the entire perimeter of the room, interrupted only by the central arches and the choir stands. The interior lighting is provided by the lunettes of the central arches and a large window on one side of the entrance. The church used to be home to the Triptych of Pavanino, stolen in April 1990, then recovered, and now preserved in the church of San Francesco, depicting the Virgin and Child Enthroned, sided by St. Catherine of Alexandria and St. Eustatius. Today the church is closed to religious worship.