Bernardo Silvano was a geographer and humanist born in Eboli around 1465. As quoted by many scholars of geography he corrected many longitudes and latitudes of the map of Italy and of the world as know at the time. His famous globe, in which are featured the new lands discovered in the fifteenth century is kept at the American Library in New York. He was also paid tribute in Paris where a street near the National Library, where some of his works are kept, is named after him. In 1570 he was included in the list of cartographers and geographer in the works of the Theatrum Orbis Terrarum. 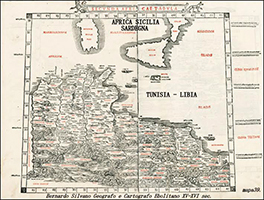 It is unknown wether Bernardo Silvano was secular or a cleric, what is known for certain is that after finishing his studies he left Eboli and never returned. We have records of his first work thanks to his name being published in the work of humanist Roberto Coenalis in Paris 1557; it is a manuscript in latin, it’s last page reads: “Ex officina Bernardi Silvani Eboliensis A.D. MCDXC”. It is historically proved that in the fifteenth century Eboli had a printing house where this manuscript was produced. The manuscript was dedicated to Andrea Matteo Acquaviva, duke of Atri, Prince of Teramo, Count of Conversano and Duke of Eboli. His dedication reads the following: “Not because you are my prince, possessor of many estates, not for the name and ports and the riches owned, but because you deal with literature, poetry, and you delight of yourself with Geography. A prince is great for the virtues of mind and intellect: all of this you cultivated, becoming famous not only for the vastness of your domain, but by surpassing many scholars […]. This work is dedicated to you, that patiently encouraged me and stimulate my intellect, and it should be you to reap the benefits. " 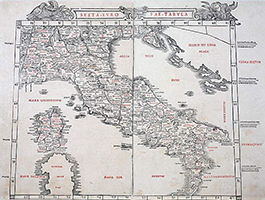 Bernardo Silvano is quoted by many for bringing real changes and important correction to the maps of Italy and other lands and giving a true new representation of the world at the time. After the discoveries of Columbus and Vespucci it was a necessity to rewrite the maps of the world and Bernardo took on this role. 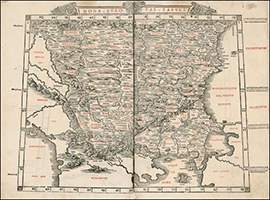 Upon confirmation of the “new” shape of the earth he created and invented new ways of drawing the world on flat paper.

His prestigious “mappamondo” represented for the first time discoveries such as Cuba, Dominican Republic Hispaniola (Haiti and Terra Sanctae Crucis), souther America and oriental Asia. The date of his death is unknown.