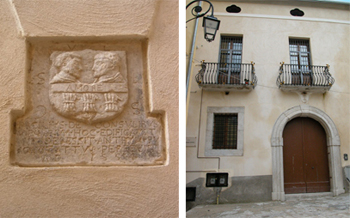 The distinguished and aristocratic family de Consulibus lived in Eboli before 1500; seven members of this family asked to become priests. Giovanni Pacilio de Consulibus, by order of Emperor Charles V of Spain, administered, from September 1551 to May 1552, the revenues of the estate of Eboli. The de Consulibus joined in marriage with some of the most illustrious families of Eboli, among which the aforementioned Amore family. They also possessed a chapel that had been erected by Giovanni Pacilio in 1534 in the church of Santa Maria delle Grazie, in Eboli.

The Mansion of the sixteenth century is situated not far from the Benedictine Monastery. It belonged to the noble Ebolitan Pacilio De consulibus, treasurer of the prince of Eboli. It was severely damaged by the 1980 earthquake, yet the building retains its original configuration, almost unchanged. Balconies with stone molded shelves, wrought iron railings and an entrance portal in carved stone are visible from Via Capo di Ferro, from where you can see and admire the fine coat of arms depicting two human profiles in relief, topped by the word "Amore 1554", representing the marriage between de Consulibus and the Amore Family. The current coat of arms is only a recent copy, albeit refined and valuable, of the stolen original. During the decades od complete abandonment many more object were stolen and the landscape change following the terrible earthquake of 1980. The building preserves in it the remains of a sacred fresco.