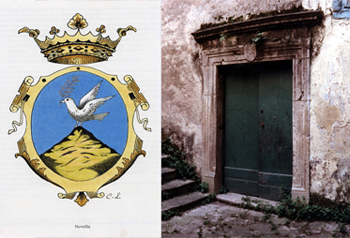 Of the ancient and noble family Novella we have references in the Ebolitan chronicles since the fourteenth century. Very wealthy and affluent, they could be related William Auger or Augier Novella, a jester born in France around 1185 and moved to Italy at the time of Frederick II of Swabia. Eight members of that household asked to become priests, five others were mayors of the city, one was abbess of the Benedictine convent of Eboli in which six other women took vows. Donato Novella was judge in 1503; Giovan Pietro, in the first half of 1500, was a notary; Peter in 1525, was a hearer of the ducal court of Ferrante Sanseverino, Prince of Salerno. He acquired the chapel of the Epiphany (1534) from the Conventual Friars of the Convent of St. Francis of Assisi. But the most famous and important member of the Novella family, he lived in the sixteenth century, was the Capuchin named Father Roberto of Eboli. Among the other components of this family were the canonical Vito Novella that paid for an altar to be built in the church of Santa Maria della Pietà in 1779 and had it marked with the emblem of his family. Another member was Raffaele Novella from 1799,he was a fiscal of the Royal Directors of Persano. In mid 1800 we find, in Eboli, we don's find any more Novella family members, but remember Vincenzo Morgigni Novella, who lived in Salerno and was judge of the High Civil Court of Naples.

In Via Attrizzi you can admire the Mansion of the Novella family of the sixteenth century, surrounded by narrow alleys and characterized by an irregular plan that, together with the sloped terrain, determines a compact and articulated volume. The building is preceded by an atrium and has a portal in ashlar stone that leads into a square courtyard, on the left of which is the ramped access to the upper floor. On the front there is a molded stone portal dated 1605 and the coat of arms of the family depicting a silver dove with an olive branch.